In a nutshell:  ‘Worldview’ is a term used to describe how a person looks at the world, how they understand the world works around them.  One’s worldview is formed from one’s culture, religion, and philosophy, as well as their own personal biological and psychological make-up.

People mean a lot of different things when the term ‘worldview’ is used.   Some people think worldview is the same as a point of view, or an individual’s personal perspective on a certain subject.  Depending on your view, there could be millions of worldviews, with each individual having their own unique perspective of how the world works, but this

understanding is not helpful in how Immanuel Kant (1899) originally meant it to be used.  There could be dozens or hundreds of worldviews as broken down by individual people groups, classified by variations of religion, cultural practices, and philosophies.

Sometimes a worldview is described how a person sees the world cosmologically, meaning whether or not you believe in a God, don’t believe in God, don’t know if there is a God, believe in many gods, or you believe you are god.  For example, take a look at the chart below. 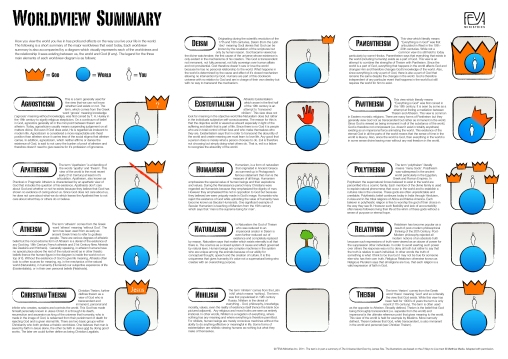 Use the flowchart below to determine which ‘spiritual worldview’ you relate to. 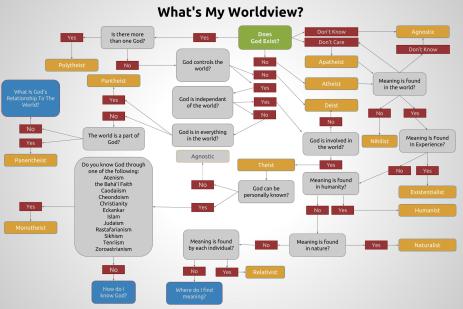 By following the chart above you can determine which ‘spiritual worldview’ you hold.  What category did you fall into?  What is displayed above is basically a list of different ‘spiritual’ worldviews, but these ‘Religious Worldviews’ is only one important part of what contributes to develop our worldview as a whole.

Some scholars focus on only three major worldviews for western European cultures; Scientific Naturalism, Post-Modernism, and Theism.   Each of these worldviews represents one of the most common worldviews found in today’s world.  In other words, these ‘schools of thought’ are how people today perceive today’s world.  But where does one’s worldview come from to begin with?

One’s worldview can develop in many different ways depending on one’s culture, history, and personality.  One way to look at an individual’s process of development of worldview is a triangle in which one’s culture, philosophy, and theology inform each other. 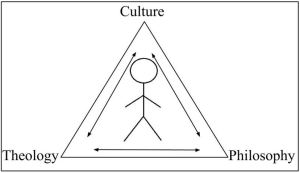 heology – A person’s most personal training, for it is one’s family that often determines one’s spiritual beliefs.  There is an argument by both theists and atheists that children often follow the beliefs of their parents.  A better term for Theology here is Cosmology, meaning how a person understands the nature of the universe.  For example, an atheist might claim to have no religious or theological beliefs, but they do have a cosmology (They would believe that the Big Bang created the universe devoid of a Supreme Being’s involvement.)

Culture – The next largest influence, experienced in one’s local environs or school, is one’s culture, which consists of a region’s history, tradition, and practices.  You can find variances in the nature of one’s culture on a geographical basis of streets and neighborhoods, towns, counties, and states.

Philosophy – The largest geographical area which develops a person’s worldview is their region or country.  A person born in Soviet Ukraine would have been indoctrinated by their national government as to what philosophy to embrace, Dialectical Materialism, in this case.  Often their theology, which may differ significantly from that espoused by the government, might have been taught by their family members. They would learn about their culture from their neighbors and village.  Naturally, the degree of influence from philosophy, culture, or theology could vary drastically from region to region.

Individual Uniqueness – There is also a fourth element to worldview which has perhaps the most important element of developing one’s worldview, and this is a person’s own individual personality and biological disposition.  The stick figure in the middle of the triangle represents the individual.

There are numerous ways to quantify an individual’s personal characteristics:

When considering how one’s personal characteristics help to form one’s worldview, one must consider a person’s individual, perhaps biological, propensity towards conservatism, faith, ability to accept uncertainty, and strength of faith.  Some people are predisposed to believing in the supernatural, whereas some are incapable of conceiving a ‘higher power’.  Likewise, some people have a more conservative nature, both socially and fiscally, which may also be a factor in how they allow their worldview to develop.  Studies have found that political conservatives and liberals have subtle differences in the structure of their brains, suggesting a biological pre-disposition towards one way of viewing the world over another.  A person’s sexual preference can also influence his or her worldview.

Worldviews ossify as people become adults, notwithstanding the occasional major paradigmatic shift in one’s worldview during  adulthood.  While many people settle on a worldview by their twenties or so there are the few people, like C.S. Lewis, who experience a dramatic change in their worldview by evolving from an agnostic to a Theist, or from a spiritual person to an atheist, such as the comedienne Julia Sweeney.

You can think of the Westerlund Worldview Model as a Recipe which works like this. 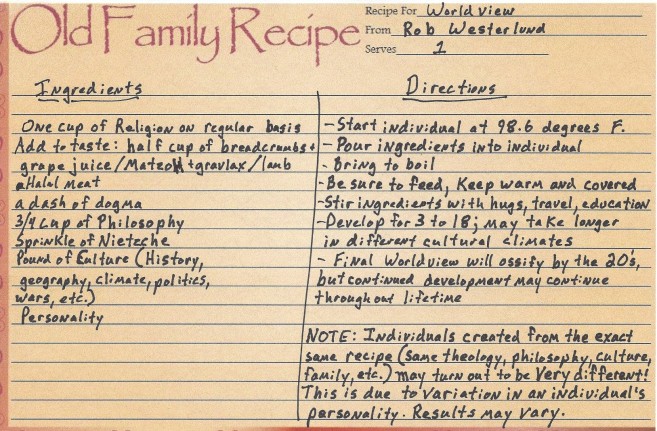 Let’s look at some examples of how Theology, Philosophy, Culture, and Personal Uniqueness influence the development of a person’s worldview differently in accordance to where a person was raised.

In the Soviet Union, a student’s worldview would have been shaped by a strong influence of philosophy, a significant influence from the culture, and a slighter influence from theology.  Before the Russian Revolution, Russia and its surrounding countries were very religious, observing the Eastern Orthodox beliefs.  The Russian Revolution did away with religion, God, and free enterprise and enforced the doctrine of Dialectical Materialism, atheism, and promoted a collectivist mindset.  People all were paid equally, studied hard at school for the glory of the Fatherland, and were punished, even killed, if they tried to engage in selling things (capitalism) outside of the government-controlled stores.  Philosophy played a huge part in developing their worldview, as did Culture, which became blended with their political system.  Religion’s influence in forming the worldview of Soviet-era students declined after the 1920’s but has recently picked up again.

In Saudi Arabia, children’s worldview is formed from a greater influence of theology and culture and less from philosophy.  For example, the people of Saudi Arabia have very different rules concerning the dress and behavior of women;

they cannot drive cars, cannot vote, and cannot travel about town without being covered by a hijab or burka.  While there may be departures from these cultural norms from time to time, these customs are commonly held by most of the girls and women of Saudi Arabia.  They understand that these rules are based on Sharia law, religious laws found in the holy book of Islam, the Quran.  Their religion teaches them that they must defer to their fathers or husbands.  They view the world as being made by Allah, the God of Islam, and that God communicates his will through his prophet, Mohammed, and the words he spoke written in the Quran.

In the Soviet Union Philosophy had the largest influence on worldview, and in Saudi Arabia Religion has the largest influence.  Remember the charts above about worldview?  They focused on a person’s view of God, but I said this is not worldview, but only the Theological part of worldview.  Worldview doesn’t start from your religious views, but one’s cosmology (the way one understands how our world was formed and how it functions) has a major impact on the development of one’s worldview.

sub-Saharan African are animist and they believed that spirits inhabited nature and are very active.  Africans are traditionally known for behavior which reflects their worldview of a very active spiritual world.  Even when European missionaries travelled to Africa in the 1700’s and 1800’s and lead millions of Africans to convert to Christianity their worldviews stayed the same.  They saw the world in the same way; they merely accommodated their thinking to include another God who was similar to a previous god.

So, the charts above list various types of Theological worldviews, but as I’ve already stated a worldview is more than just one’s religion or cosmology.

People often behave and interact with others in their community according to their worldview.  Please take a look at the model below. 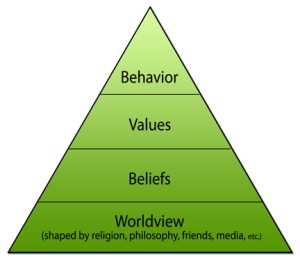 This model demonstrates how our beliefs are based on our worldview (or are an element of our worldview) and that our values are built on our beliefs.  If people are acting according to their values then their behavior reflects their values, beliefs, and worldview.  In the concentric circles below we see a slightly different model.

Here we see a model for a particular Christian school which expresses how the school’s corporate worldview is the core of their values, and that the behavior of their students should reflect their values, which in this case is based on Judeo-Christian ethics.  Interestingly, this model proposes that the culture is based on behavior of the students rather than is an integral part of the development of worldview.

Rob Westerlund is the most recent addition to the writing staff at the Middleton Cross Plains Time-Tribune and Star newspapers. Rob was born in Pittsburgh, Pennsylvania and raised in Iowa, a graduate of the University of Iowa where he studied television and film. His first years after college were spent in Los Angeles where he labored at television and movie studios, trying his hand at writing and acting. He earned his Master of Divinity at Bethel Seminary and ministered in several churches as director of drama, minister of worship, and pastor. While teaching communication courses at local colleges he earned his M.B.A. He has previously published magazine articles, curricula, and other creations. He is currently publishing his latest novel, First Person Omniscient. He is married to Ruslana and has two sons, Julian and Nicholas, students in the Middleton-Cross Plains school district. They have two dogs, Charlie and Bella, who are favorites amongst their neighbors in Cross Plains. View all posts by robwesterlundblog

2 thoughts on “What in the World is a Worldview?”